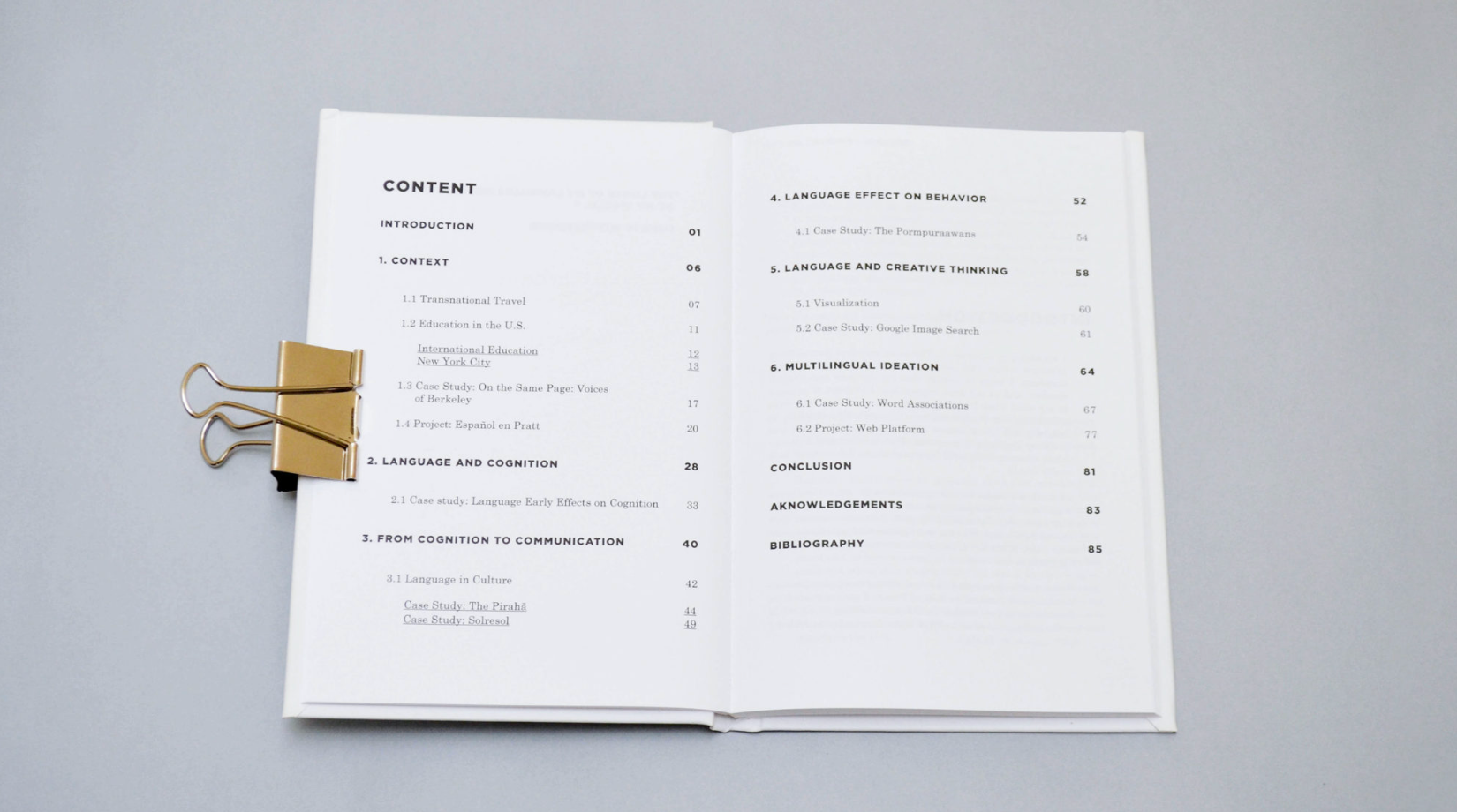 “Change your tools, it may free your thinking.” Paul Arden.

It’s 2013, I’m sitting in a classroom at Pratt Institute in NYC and a sudden realization strikes me: I’m the only non-English speaker in my class. For some reason, I begin to feel insecure and stupid. I’m no longer sure about how I’m gonna handle myself in class, what I’m gonna say or how to say it. This horrible feeling lasted for the whole first semester and despite the fact that I actually know how to speak English very well, not being able to use my native language kept me somehow blocked from communicating and —the worst of all— from creating. I often wondered what it would have been like if my classes were in Spanish. I believe my behavior would have been at least a little different.

Lera Boroditsky, Associate Professor of Cognitive Science at UCSD and Editor in Chief of Frontiers in Cultural Psychology, who centers her studies in language and cognition, stated at an event for UC Berkeley in 2011:

“This is a very, very common experience. Bilinguals very often report that they feel like they are a different person.”

There is more to language than just speaking it. A language carries its own cultural baggage, its own associations, its own way of processing information, and perceiving the world, and therefore, we can argue that it is tied to identity. Once we understand this, it becomes easy to imagine why many people feel conflicted when they switch into a foreign life.

Adapting to a new culture takes time and seldom comes easy; according to a report from the National Center for Mental Health in Schools at UCLA in 2013, most international students experience some degree of culture shock as they enter schools in the U.S. Who would have imagined that one of my deepest problems would actually become a thesis topic that led me to conclude grad school?

As most people who have studied another language know, different languages grammatically distinguish different kinds of things. For instance, some languages such a Spanish, mark the grammatical gender of all nouns and adjectives; others such as English, do not make gender distinctions at all. A study by Lera Boroditsky in 2003 using speakers of German and Spanish showed that the grammatical gender of an inanimate object can influence the way speakers consider it. When asked to describe a key, for which German word is masculine and the Spanish word is feminine, German speakers called it strong, dangerous, sturdy, and towering, while Spanish speakers called it pretty, peaceful, elegant, beautiful, and fragile.

What does this suggest for design? Ideas are undoubtedly processed through concepts described in words, and these words have enormous significance since they represent a complex set of characteristics, some of which may help the designer to see a specific way of proceeding. But it is precisely that designers need to understand problems and figure out solutions through a process that involves changing the way a situation is perceived. “If you get stuck, draw with a different pen,” says Paul Arden, British author, and Creative Director, in his book It’s Not How Good You Are, It’s How Good you Want to Be, and just as using a different drawing tool, allowing multiple languages to influence during the ideation stage can be key to find inspiration and overcome design blocks; it will offer a hybrid perspective.

One of the first exercises I did for my investigation was to ask Spanish speaking students at Pratt’s GradComD department to make word associations. I prepared two sets of words, one in English and one in Spanish, both of them containing the exact same words. I mixed both sets and I told the students that I was going to read some words for them. I then asked them to please tell me the first word that came to their minds (in any language) according to the words they listened:

The more conscious I got about my design process, the more I realized I had actually been using the different languages I speak to my creative advantage. If I happen to be designing something, and I do so entirely in Spanish, my design outcome could be, for instance, a square. But now let’s say that I design the exact same thing, only this time entirely thinking in English; the outcome wouldn’t be that exact same square, moreover, it could be a completely different shape such as a circle.

In my experience, applying multiple languages during my design process has helped me to enable hybrid outcomes. However, I have found that multilingual ideation is not something that creatives use intrinsically, it’s not a habit, and the importance of language as part of the design process has been rather underestimated in much design research. I’d like to leave an open invitation for a deeper exploration to understand multilingualism and how it could be utilized as a tool for designers.