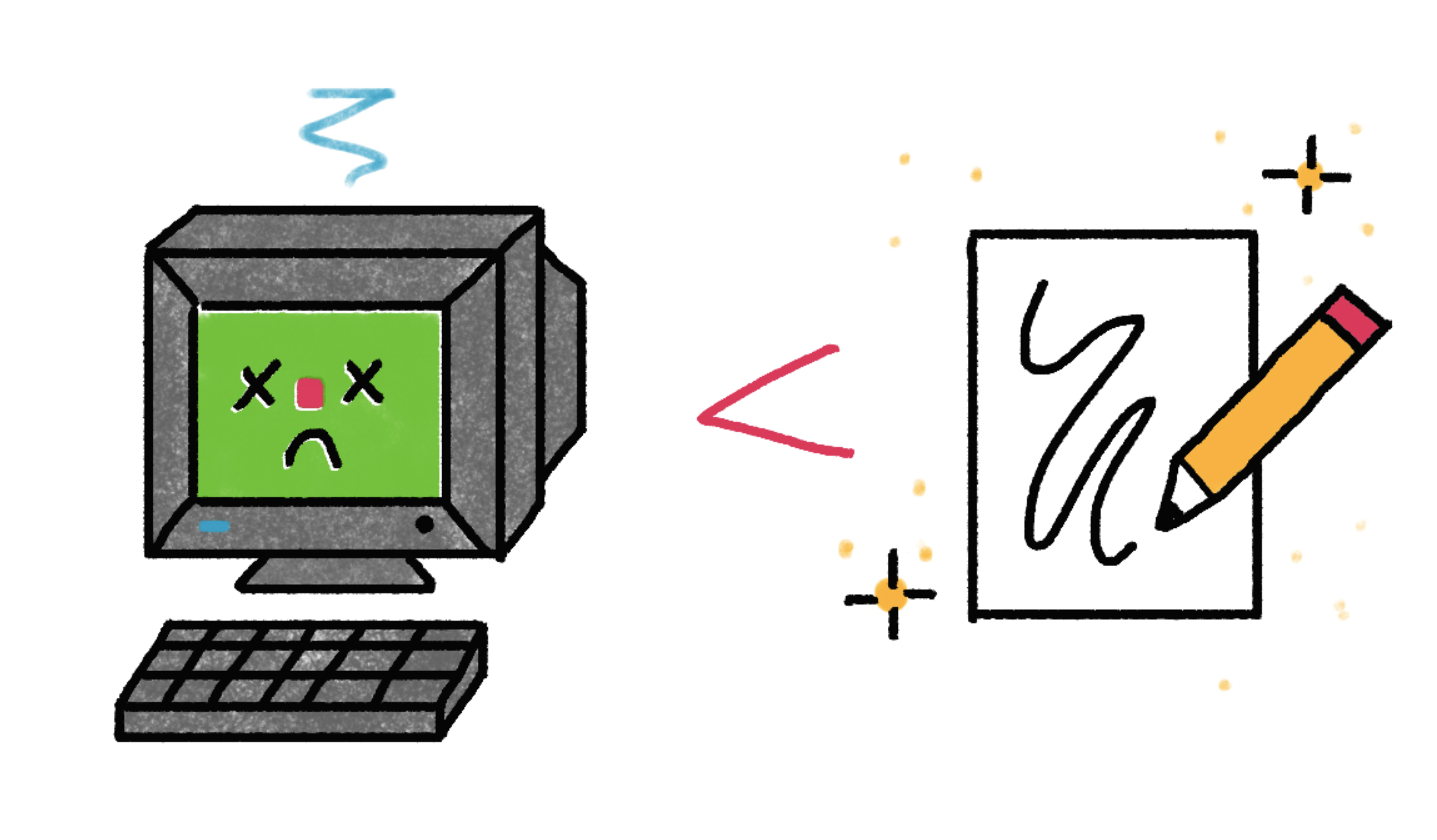 Disorder to control: How working on paper makes me a better designer

To start, you just need a blank piece of paper. As designers, we are obsessed with beautiful notebooks or romantic moleskins - but really even a napkin will do.

Generally speaking, I am chaotic by nature. A flow of disorganized thoughts rule me followed by conscious attempts of keeping everything organized. From keeping daily journals, color-coded folders, astrology, and intermittent fasting – the things I seek the most are the ones that give me structure and order. It helps me make sense of things, and more importantly, it helps me understand myself.

It helps me understand that there is nothing wrong with me or the way I am and think – just that the input and output of information runs and flows quite differently. The world is just not designed for everyone, and once you understand that it becomes easier to learn how to live within it.

On the first day of university, I was asked: “Why do you want to become a designer?” “Because that is the only thing I am good at”. Of course, this is not the case, I am a hella good cook, but at that moment it sounded very true. Design seemed the perfect world where I would fit in, after all, design is a funnel where ideas and concepts come in and tangible down to earth assets come out. I was worried I would harm someone if I ever became a doctor just because I forgot the scissors inside someone’s intestine. Design seemed the place for outsiders and geniuses: the place where you could make your own rules.

I attended a traditional university with an old-school approach to design, so I had trouble from the get-go (with teachers, systems and the overall rules) but I learned something that maybe I could not have learned if I attended a more modern design university: how to work on paper before even thinking about using a computer. This was mainly because many of my teachers were above 30 and my school’s computers dated to the time where the thought “the boxier the better!” was all the rage. Nevertheless, it worked: whenever I had an assignment I was encouraged to take a bunch of blank pages to draw and write whatever was racing on my mind – from doodles to unreadable notes that would later be the basis (or the main reference at least) of the final work. I am aware that for the casual observer this made me look at times like a crazy hoarder lady with deliriums of artistic flare – but it worked for me. It gave me the structure I needed to actually have a process of my own. One that would take the unfiltered gibberish that was in my head and transform it into a language for everyone to see and comprehend with ease.

To start, you just need a blank piece of paper. As designers, we are obsessed with beautiful notebooks or romantic moleskins – but really even a napkin will do (napkins and any other surface not-meant-to-be-used-as-paper-but-this-will-have-to-do-for-now are great in an emergency, but be careful as they can be easily disposable and seen as trash). For instance, I usesingle half-sheets of paper, and not just because we have like a zillion of those at the studio – but because they are easy to organize afterward and can be rearranged in multiple ways: Maps, diagrams, workflows, wireframes – you name it. I manage several projects at once so if I were to use a notebook I would have notes of all projects mixed up together (I mean I can probably organize a notebook in separate sections for each project but – AIN’T NOBODY GOT TIME FOR THAT. Also, not every project has the same workflow or the same length so it would result in blank pages here and there and not that organized system by the end and me having anxiety attacks). Meanwhile, separate sheets of paper can later be grouped by whatever label fits best in a cute little binder.

Another important thing is that working on paper also means the possibility of working with multiple materials – maybe a project needs not only light sketching but some avant-garde use of paint and watercolor. So while there is now state-of-the-art digital brushes out there that look almost the same as the real thing, the graphics and assets created with organic processes really do make a difference in the final work – plus more control in the overall process. Tech is moving forward really fast, but the human eye can still appreciate when something is made by hand as it adds the value of time and craft skills to the final work. Clients love that kind of thing, trust me.

Finally, find a note-taking/sketching making style that suits you. We are all different and process information just as differently; for instance, I am extremely visual so I tend to do more drawings than actual sentences and whenever I do have to write big blocks of words I usually do diagrams with arrows and visual cues to guide me. Think of these notes as flashcards for a presentation, they are not supposed to contain everything but just the necessary information to guide your ideas and skills to where you need them.

One of the main reasons why people do not sketch or work first on paper as part of the creative process is because it is, after all, a skill that requires quite a lot of practice. In high school, I was taught several methods of note-taking (the extremely organized Cornell method where you create a system of bullet points on the side of the notebook page, for example) but they never seemed to stick. It was only through the raw process of studying graphic design and actually working in the field that I learned and refined the ‘hows’, and even now and then have to make changes to make it work again.

Just like the coolest things in life, you grow alongside it. At times only I can understand my notes and that’s okay – they are meant for me and only me, they are not showcase/portfolio material. Even when I had to create hand-made assets for a project, the idea of it being only the first step to later be refined, gave me the freedom to be open to mistakes and experimentation. When I stopped pressuring myself to make beautiful or instagrammable sketches (aka, for the world to see, understand and appreciate) they started to work the most. Dare to cross the fields of imperfection and disorder, I promise the mess in your head will be just fine.